I had a stonking time yesterday afternoon with Harvey Sharman, who runs workshops for young coders in a library close to where I live. This particular afternoon was spent in the company of a group of eager eleven-year-olds. Harvey’s learning activity? Use Mu to program “transmitter” and “detector” micro:bits so the kids could organise a treasure hunt in the library. Let joyful coding chaos ensue!

I first became aware of Harvey’s work via the following tweet: 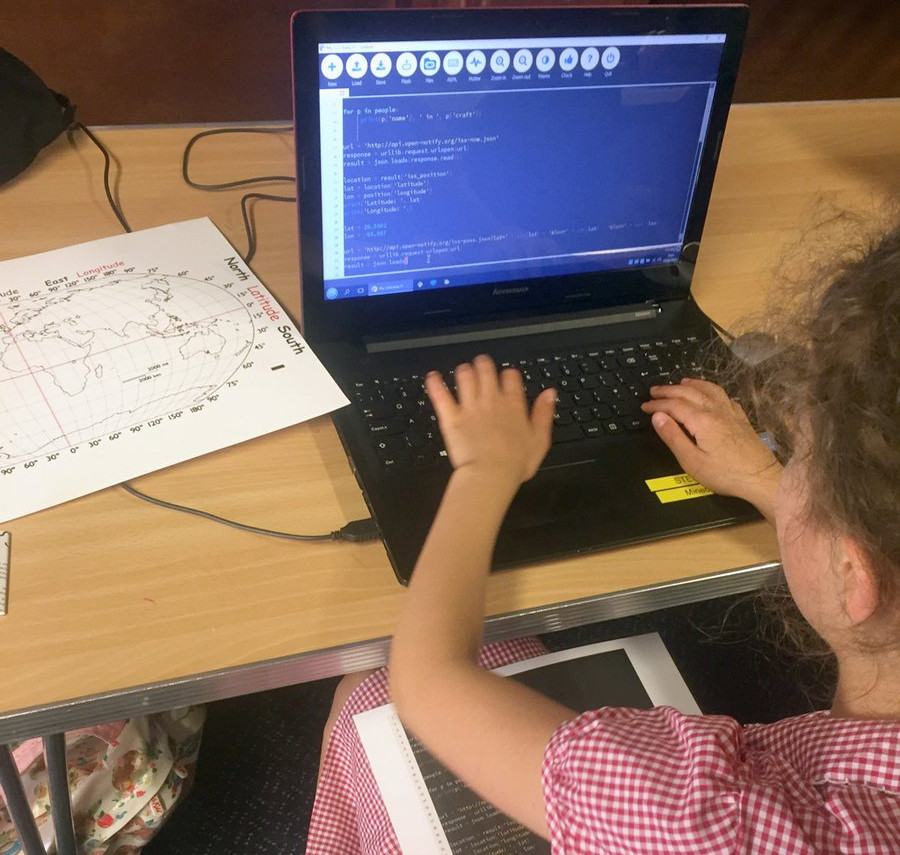 One of my pupils inspired in Python Mu hard coding the International Space Station project to collect live data of latitude and longitude coordinates to locate the actual position of the space station using an A3 print of the global map with coordinates. @ntoll 🛰️ @rebeccafdp pic.twitter.com/Ke2JKzDiju

It was a stroke of luck that I live in the next village from Harvey and I just had to investigate. As a result I was invited to observe Harvey and his students in action.

The group of eleven-year-olds sped through the task of writing the code, checking it and flashing it onto the micro:bit. Then the group split in two: half were unleashed into the wider library to hide their “transmitter” micro:bits and upon their return the other half were let loose, waving around poles with their “detector” micro:bits stuck on the end. If the “detector” got close to a “transmitter” it would start to bleep and the “X” on the micro:bit’s display changed to a number to indicate the relative proximity of the devices.

Imagine, if you will, a sleepy afternoon at Brackley library: the knitting circle quietly click-clacking in one corner, a pensioner’s jigsaw club (armed with tea and biscuits) in yet another, and a hoard of enthusiastic eleven-year-olds waving around blinking and bleeping poles at anything and everything (including the afore mentioned knitting circle and jigsaw club) in an attempt to find “treasure”.

To say the kids had a huge amount of fun is an understatement (to their credit, the other library users were very patient and I was especially pleased to see maniacal grins on the faces of the librarians as the kids explored all the various sections of the library). Public libraries are such an asset to our communities since they’re the only place the pensioner’s jigsaw club could rub shoulders with eleven-year-olds from a code club. Two different parts of the same community got to see what each other were doing.

Afterwards, when the kids had left, we recorded the following video to explain how things work:

The source code is very simple and takes only minutes to type in. The detector works by checking the strength of radio signals. The stronger the signal of a received message the closer you are (and the higher the number displayed and the bleeps from the speaker). The transmitter micro:bits constantly send out signals at the lowest possible power so the signal is only detected when you’re stood close by (I’d say around 3 to 4 meters). This is beautifully simple and ingenious and could form the basis for all sorts of interesting classroom activities and learning opportunities. How might you improve the code?

Harvey tells me that Mu makes Python programming easy for his young coders and my own observations during the workshop confirm this. It took moments for the kids to figure out what to do. It was also cool to see them help each other and make suggestions for using Mu. For instance, once one kid figured out how to use the autocomplete functionality to avoid typing long words, they were all at it after the inevitable, “hey, look at this!”.

I look forward to more projects, games and “hacks” from Harvey and his young charges (and I’ll keep you posted!).