Last week was PyWeek, where entrants have a week to make a game on a given theme using Python. Myself and my buddy Andrew Smith decided to form a team called Code to Joy and write something using Mu and PyGameZero. At the start of the week the theme was revealed as “flow”. We ended up creating “Traffic Flowmageddon” with gameplay like 80’s classic Frogger, a look similar to the 90’s classic Grand Theft Auto and with a dash of Shaun of the Dead thrown in for some timely Halloween spice. The opening screen pretty much sums up the character of the game: 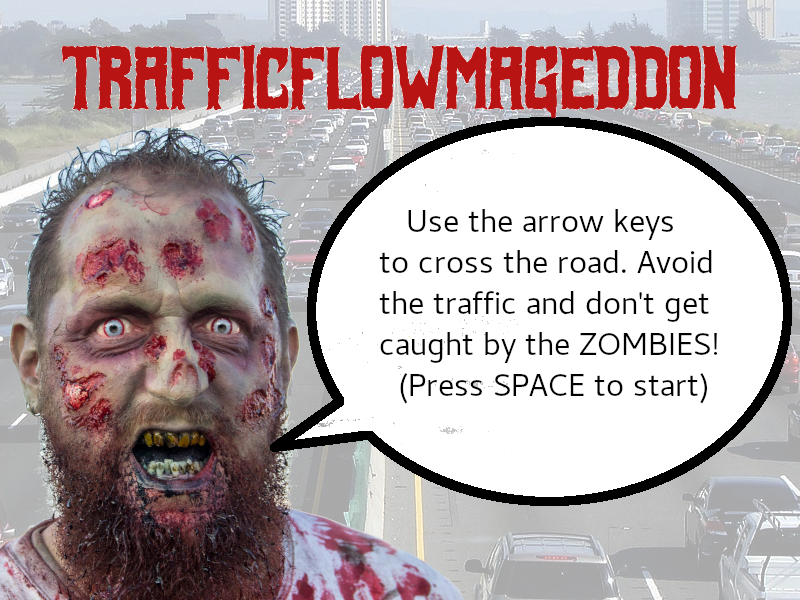 It was fun to work in a team. I mainly concentrated on the code and Andrew spent time on the sound effects and music. The graphical assets were either bodged together by us or were free-to-use downloads from the internet. What was particularly pleasing was how quickly we were able to put together the scaffolding of the game in a very short period of time and just under 100 lines of Python:

Yes, that’s quite an abstract looking game (none of the graphical assets had been created), but the labelled boxes and fact that stuff is moving around demonstrated the core of the game worked well. Having said that, simply adding some proper graphics and an animation on the hero sprite that the player controls makes a huge difference! It actually looks like a game:

At this point in the development of the game, one of us had the idea of adding zombies and, since I’d been tweeting about our progress, we were getting suggestions for other features from friends (such as potholes in the road which would slow you down, or drivers with no lane discipline).

The zombies make a big difference since they force you off the pavement and into the flow of traffic.

In the meantime, Andrew had been putting together music and sound effects as well as the code to load and play them at the appropriate moments in the game. This was especially rewarding to hear since sound and music add so much to the atmosphere. Andrew found some appropriately spooky sounding music, a “happy tune” to play when the game completed and a whole host of sounds for the zombies and traffic (for example, if you get too close to one of the London taxi cabs, the driver will shout at you).

As the video shows, the finished game works quite well for something cobbled together in just a week. Most importantly, it’s all done with Mu and PyGameZero in around 400 lines of Python.

I’d heartily recommend anyone participate in future PyWeeks. The organiser, Dan Pope (who also created PyGameZero) has done a fantastic job of creating such a fun competition with a community of coders creating such joyously goofy games.

Long may it last!