I recently had the great pleasure of visiting Wollaston School to see Steve Foster use Mu in his classroom. Here he is in action, in perhaps the most “teacher-ish” photograph you’ll see for a long time: 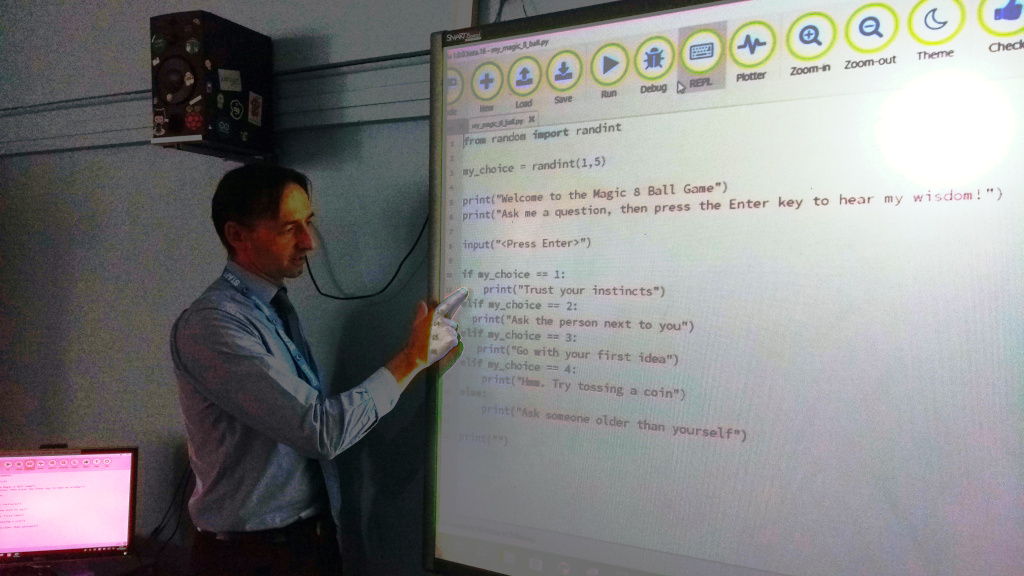 This wasn’t my first visit to see Steve. He very kindly allowed me to observe his lessons back in 2017 when I was researching how learners and teachers engage with software development tools. His was the first of several schools and code clubs I visited for this purpose and, in addition to observing lessons, I interviewed him and some of his colleagues. In fact, it was as a direct result of chatting with the network administrators at Steve’s school that so much effort was put into making Mu easy to install. I was very pleased to hear that the very same network administrators had easily managed to install Mu on the computers in Steve’s classroom.

On this visit I observed two lessons: a year 10 GCSE class (students turn 15 during year 10, and GCSE is the examination all students take at age 16), and a year 9 computing lesson (students turn 14 in year 9 and decide their “options” [which GCSE courses to take] during this academic year).

Both classes were exceptionally well behaved and engaged and the students were friendly and enthusiastic to learn. They’re a credit to themselves, Steve and their school.

I was simply introduced to the students as “Nicholas - a software developer” and played the role of a teaching assistant. This prompted a sense of nostalgia for me. Having students say, “Sir, I’m stuck on this problem” made me remember my time as a secondary head of music all those years ago and it was fun to collaborate with and support young people in their learning. There are some aspects of teaching which are extraordinarily rewarding and a privilege to experience – this was one such an occasion. 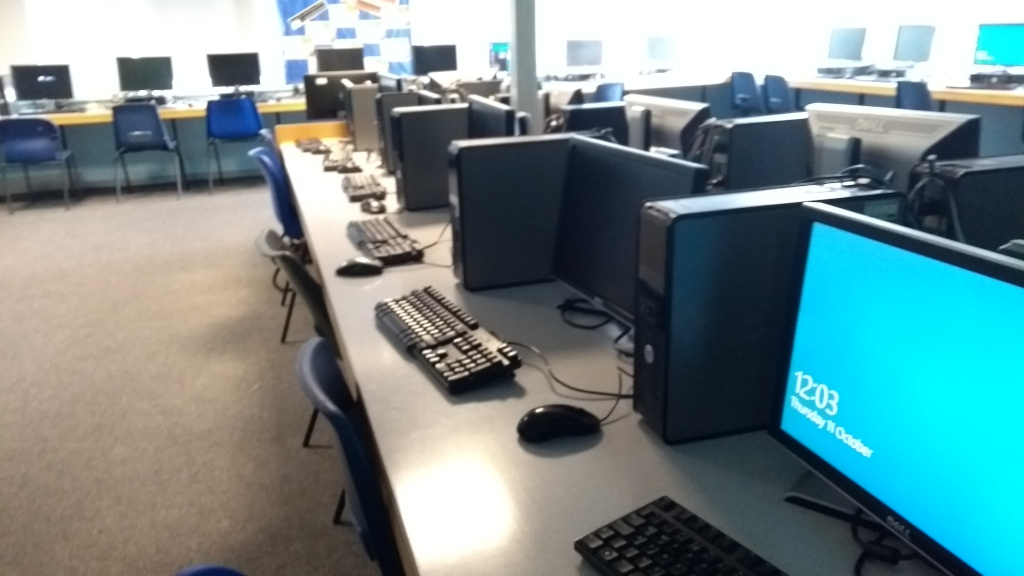 The students in year 10 knew what they were up to and were already familiar with Mu. It was good to see them use the editor with such fluency ~ to the extent that they were concentrating on their coding problem rather than getting side-tracked by their development environment. The first time I visited the school, I seem to remember students using some sort of online Python tool and I spent much of my time trying to help them fix the odd state into which they had got themselves. I also had a great sense of satisfaction when I saw how many of them were using the “Check” button to report potential problems with their code. They told me they found this especially useful when they ran their code and ended up with a syntax error. The “Check” button visually points out the problematic line and describes the problem. Far better than wading through terse computer-ese.

The year 9 class was especially enjoyable since I was watching their first encounter with Mu. In the previous academic year (before Mu 1.0 was released) they had been using IDLE as a development environment. Being able to observe their first contact with Mu was an amazing opportunity.

Steve started the lesson by introducing Mu as a new Python editor and then gave the class a few minutes to poke around with it before asking them to report back on what they’d discovered.

Within seconds, one of them had found the “Theme” button and toggled through to “night” mode. This was followed by a hilarious few seconds of excited whispering as the students all tried to turn their Mu editor into “night” mode. Within about a minute, everyone had “night” mode enabled and the class were feeling suitably “Hollywood hacker-ish”. 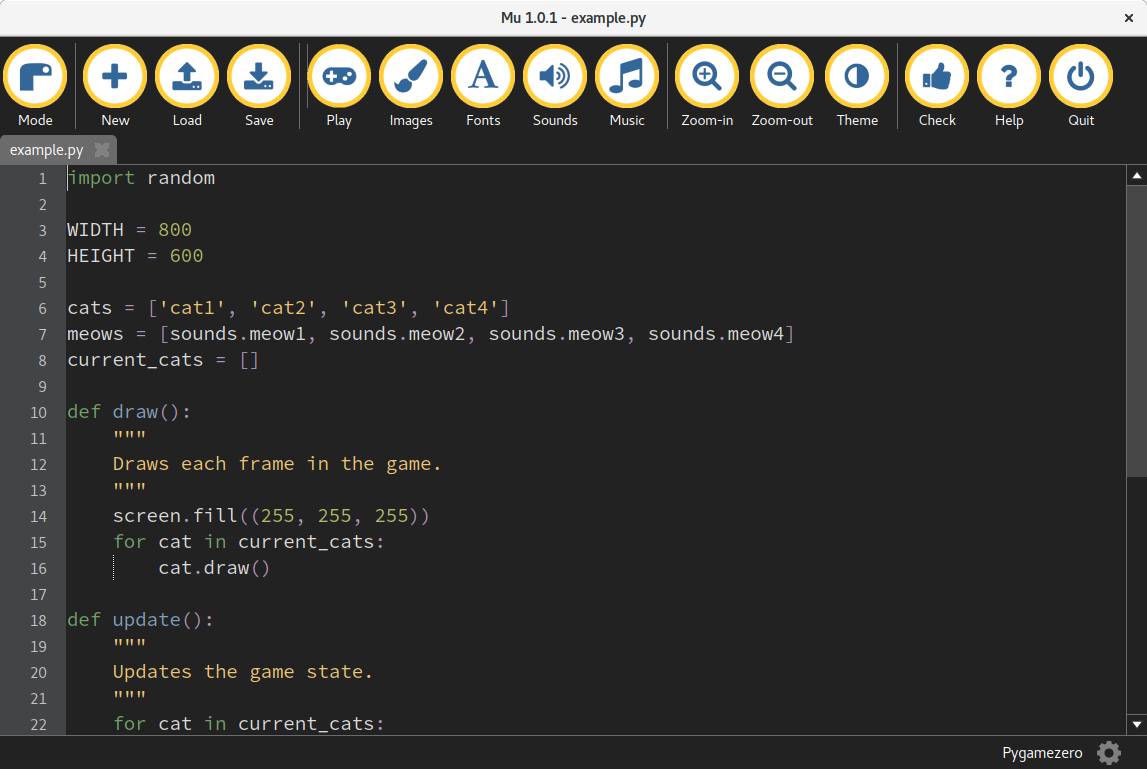 Some kids found the “Check” button while others enjoyed zooming in and out to extreme magnifications of their code. Most importantly, the feedback seemed positive and the students enjoyed playing with Mu (yes, “playing” is perhaps the right word).

Steve then asked them to “code along” a Magic 8 Ball script. Steve would explain some code and demonstrate it working, then ask the kids to type it in and check their version was working. After that, he’d repeatedly add more features, while giving the students an opportunity to ask questions, until the program was finished. This is exactly what Steve is doing in the photograph at the top of this blog post.

This activity was particularly fun since the students could define their own mysterious sounding Yes/No answers for the “magic 8 ball”. In a very teenager-y turn of events, one student cast their answers totally in the context of resolving relationship problems. Again, Mu didn’t cause any issues and the students could simply concentrate on customising their script.

At the end of both lessons I was given 10 minutes to tell the students a little bit about what I do as a software developer and enjoyed answering their questions. When Steve revealed I was the creator and maintainer of Mu, the year 9 class gave me a round of applause (after one girl started clapping loudly on her own, and then shouted to the rest of the class something along the lines of, “Give this guy some respect won’t ya..?”).

After the lessons Steve and I spent some time together in an interview / de-brief session. He provided more context about how Mu was used in his lessons and all the feedback I have received, be it from teacher or students, will find its way into improvements in the next version of Mu.

If you are a teacher using Mu in your classroom, please don’t hesitate to get in touch. We’d love to hear how you’re getting on and learn about the ways we can improve your own and your students’ experience of learning to program in Python.

Thanks to Steve and his students for giving me the rewarding experience of seeing Mu used in “real world” learning situations. Keep up the great work! :-)